The Primary Care Shortage by Region

Areas and population groups that are served by fewer than 1 primary care physician for every 3,500 people earn a shortage area designation from the Health Resources and Services Administration (HRSA).  Approximately 6,100 population groups, encompassing more than 60 million residents,  have been designated as primary care shortage areas by the HRSA.  The HRSA further estimates that nearly 8,100 additional primary care physicians are needed nationally to eliminate these shortage area designations.  To get a perspective on the severity of the primary care shortage by region, we aggregated HRSA State-level data into regions based on classifications used here by the U.S. Bureau of Economic Analysis. 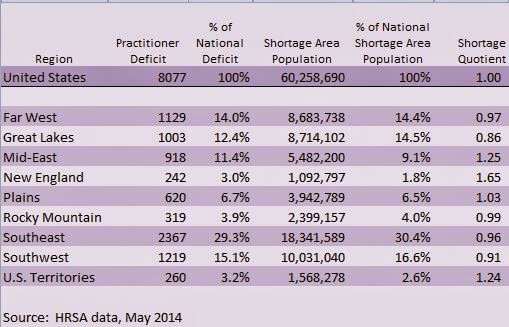 Posted by Health Guide USA Commentary at 8:29 AM