There were just over 310,000 health service management jobs in the U.S. according to May 2014 data published by the U.S. Bureau of Labor Statistics (BLS).  Health service management positions encompass a variety of supervisory and managerial jobs in healthcare settings, ranging from health information administrators to health system executives.  Although not on par with the average annual pay for many skilled healthcare occupations, BLS data puts the national mean wage of health service managers at $103,700 per year, well above the $47,200 mean annual wage for all occupations in the U.S.

Excluding the District of Columbia, California recorded the highest average pay scale for health services managers at just over $122,400 per year.  At the opposite end of the spectrum was Idaho, where the average pay was a bit less than $78,400 per year.  In all, BLS data shows nineteen (19) States where the annual mean wage for health service managers is in excess of the national mean, and thirty-one (31) States where the mean annual wage is below the national average.

Joining Idaho among The 10 Worst States for Health Services Management Pay are the following: 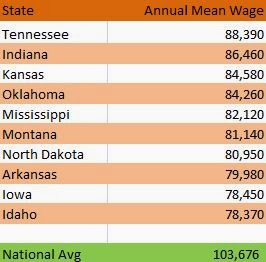 Go to Health Services Managers Average Wages by State to see where your State ranks.

Posted by Health Guide USA Commentary at 8:41 AM