With typically lower costs and additional benefits, MA Plans can be a great value compared to Original Medicare.  Consequently, as we observed in this commentary last month, Medicare Advantage plans have seen strong growth over the past decade.  March 2015 data available from Centers for Medicare and Medicaid Services (CMS) shows over 17.3 million Americans are now enrolled in Medicare Advantage plans, up from 5.3 million in 2004.

Our number-crunching of the March 2015 CMS data yields this list of the Top 10 Medicare Advantage Plan Insurers: 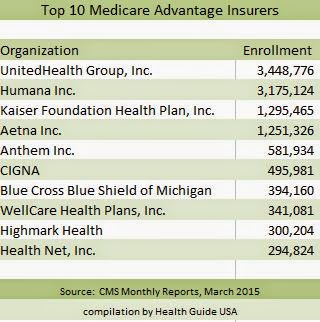 Posted by Health Guide USA Commentary at 10:45 AM