According to workforce health professions sample data taken from the American Community Survey (ACS) done by the U.S. Census Bureau, the Health Resources and Services Administration estimates that there are approximately 272,000 pharmacists in the United States.  That equates to just over 87 pharmacists to serve every 100,000 U.S. residents.  With an aging population, expanded health insurance coverage and ongoing new drug developments, the job outlook for Pharmacists is considerably better than the outlook for most professions. Nevertheless, with many States actually having a much heavier concentration of pharmacists than the nation as a whole, the pharmacist job outlook over the next decade will be much less certain in some regions of the country than it is in others.

From the HRSA data portal, here is the latest look at Pharmacists per 100,000 population: 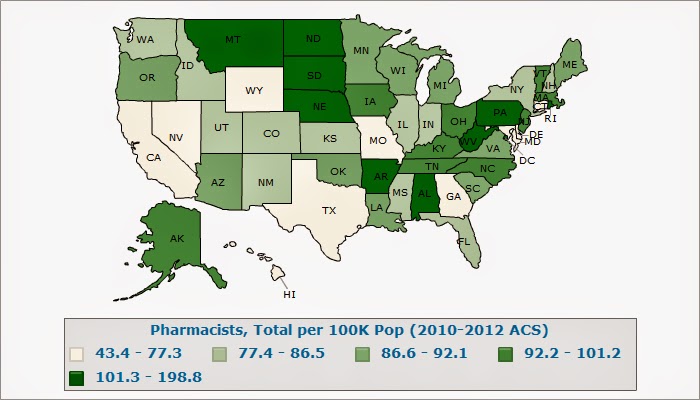 Current and prospective pharmacists looking for better opportunities might want to consider these ten states where the number of pharmacists per capita is well below the national average: 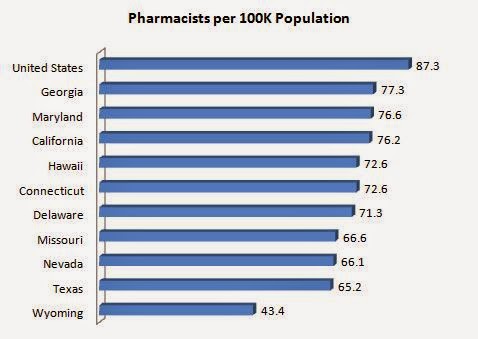 Posted by Health Guide USA Commentary at 11:00 PM No comments:

Email ThisBlogThis!Share to TwitterShare to FacebookShare to Pinterest
Labels: Pharmacists per Capita

In this interview, executives from Health for Development (H4D) discuss their new tele-health booth, which permits remote physicians to gather a broad spectrum of basic diagnostic information from patients who use the H4D booth.  Referred to as the "Consult-Station", this new tele-health platform is being introduced in France and could find its way to parts of Africa in the near future.

A Registered Nurse Glut on the Horizon?

Time and again we have heard news reports that point to a shortage of registered nurses throughout much of the country.  With demand for healthcare services on the rise, spurred by technical advances in medical care, a growing population generally and an expanding seniors population in particular, the conventional wisdom in most circles is that the registered nurse shortage will likely worsen in the coming years.

To be sure, nursing schools are turning out new RNs at good clip, but with lots of baby-boom era nurses heading for retirement themselves, the conventional wisdom is that the overall growth in the supply of registered nurses is not keeping pace with current and anticipated demand growth for healthcare services.  The U.S. Bureau of Labor Statistics (BLS) projects registered nurse employment will grow by more than 525,000 jobs between 2012 and 2022.  Moreover, taking into account the need to replace RNs who will be retiring or leaving the workforce, the BLS anticipates more than 1,000,000 registered nurse positions will need to be filled in that same time period (see Line 6 in this BLS report).

Given the BLS forecasts and the steady flow of news warning of nursing shortages, we were interested to discover this report, The Future of the Nursing Workforce: National and State Level Projection, 2012-2025, issued last month by the National Center for Workforce Analysis (NCWA), a unit of the Health Resources and Services Administration, which itself is a part of the U.S. Department of Health and Human Services.  This NCWA study projects that changing demographics and broader insurance coverage will require an additional 612,000 registered nurses by 2025.   While this is a seemingly good trend for current and prospective registered nurses, the NCWA analysis foresees the supply of RNs to grow at an even faster clip.  Despite projected attrition of nearly 1 million RNs from the workforce over the next decade, at the rate nursing schools are turning out RNs, The NCWA expects that almost 2 million new registered nurses will be joining the workforce during this period. So by 2025, the supply of registered nurses will grow by 952,000 in the NCWA analysis.  If that happens, by 2025 we could see 340,000 more registered nurses nationally than there will be registered nursing positions. 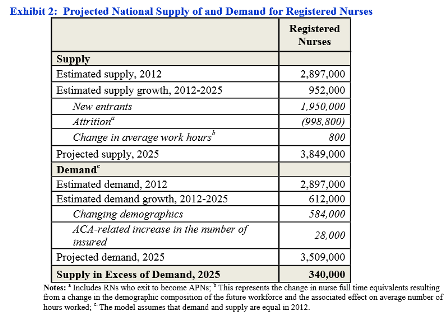 It is important to note that in the NCWA forecast model it is assumed that registered nurse supply and demand were equal in 2012.  Nurse hiring managers might disagree with that assumption.  That said, the NCWA analysis infers that the growing number of net new entrants into the registered nursing profession will materially outpace demand growth over the next decade.  If that is the case, whatever RN shortage we have today will, at a minimum, dissipate in coming years and, if the NCWA forecast is realized, could turn into a registered nurse glut over the next decade.

Posted by Health Guide USA Commentary at 6:36 AM 1 comment:

From the Health Resources and Services Administration, a look at physician assistants per 100,000 population in 2013: 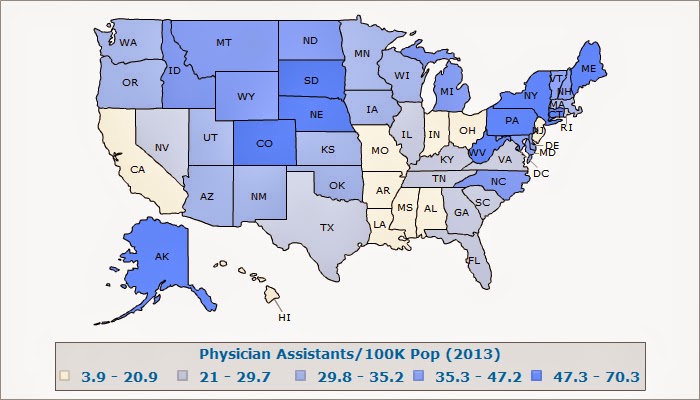 At the other end of the spectrum was Mississippi with just 3.9 PAs per 100,000 residents.  Other States with poor PA density (in white) include Alabama, Arkansas, Indiana and Missouri, all of whom had fewer than 15 physician assistants per 100,000 population.
Posted by Health Guide USA Commentary at 10:00 AM 1 comment:

Email ThisBlogThis!Share to TwitterShare to FacebookShare to Pinterest
Labels: Physician Assistants per Capita

The Top 5 Children's Hospitals in the Southwest

With top 35 rankings in eight specialties in the US News survey, second on the list of the Top 5 Pediatric Hospitals in the Southwest would be Children's Medical Center Dallas (map).  Children's Medical Center Dallas, which is the primary pediatric teaching hospital of the University of Texas Southwestern medical school, earned top 10 national rankings in two specialties (#5 orthopedics and #10 urology) and top 20 national rankings in two others.

While not placing on the list of the Top 5 Children's Hospitals in the Southwest, three other hospitals in the region earned one national ranking in a pediatric medicine specialty in the US News survey:


Posted by Health Guide USA Commentary at 11:28 AM 1 comment: