With typically lower costs and additional benefits, MA Plans can be a great value compared to Original Medicare.  Alas, that added value is frequently created, in part, from the imposition of managed care protocols and restricted provider networks not found with Original Medicare.  While MA Plans can come in a variety of insurance models, the most popular Medicare Advantage plan feature health maintenance organization and preferred provider organization structures.  Yet even with managed care protocols and fewer provider choices, lots of Medicare eligible seniors like the value MA plans offer.  There are currently about 15.3 million Americans enrolled in Medicare Advantage plans, an increase of close to 50% over the past 5 years.  MA plan enrollees now account for 30% of the total Medicare population, up from a 23% share five years ago. 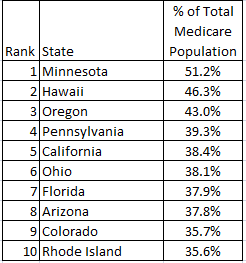 Posted by Health Guide USA Commentary at 12:21 AM