According to May 2014 data available from the U.S. Bureau of Labor Statistics (BLS), there were just over 310,000 health service management jobs in the United States.  An analysis of BLS data reveals that there was a national mean wage for these positions, which encompass a wide range of jobs from health information administrators to health system executives, of $103,700 per year.

The District of Columbia recorded the highest average pay scale for health services managers at just over $131,000 per year.  At the opposite end of the spectrum was Idaho, where the average pay was a bit less than $78,400 per year.  Nineteen States have annual mean wages in excess of the national mean per the BLS. 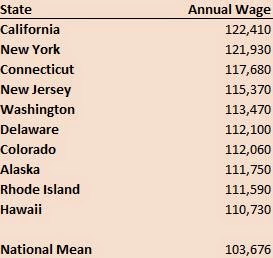 Go to Health Services Managers Average Wages by State to see where your State ranks.